A Millianite’s thoughts on Cesar Millan: more than calm and assertive! 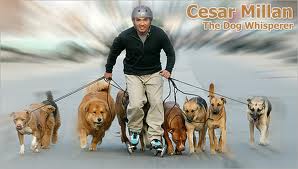 Being really Millanesque (a word I coined to describe die hard Cesar Millan fans) I said “Carpe Diem” and snapped up two tickets to his Trust Your Instincts World Tour that came to Singapore, part of the tour’s Asian leg. Blessed with good fortune was I to be able to glean new lessons from the famed National Geographic’s Dog Whisperer at the Marina Bay Sands Grand Theater; it was indeed an evening to be remembered and shared with Cesar’s many fans, my husband and the two Professor K9members of my family, Cloudy and Misty. For the benefit of all Millanites, I decided to give my own thoughts on the seminar I attended a penny and more.
The Millan Magic 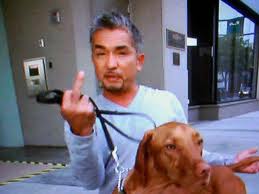 The first thing that proved to be an assault on the senses was the Dog Whisperer’s undeniable charisma and tongue-in-cheek sense of humor. He first graced the stage with hilarious witticisms on the inappropriate ways of handling a dog, presenting a humorous demonstration on how some dog owners would hastily rein their furry friends in the minute they heard him at the door. This was humor with a clear purpose though; the point that there is a right way for a dog to greet others at the door was transmitted with a foolproof signal. No, the audience certainly could not argue with that. 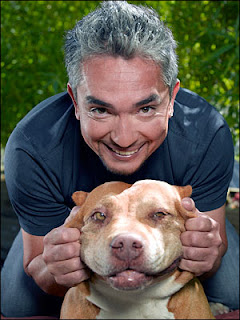 Another point worthy of note is that Cesar indeed is a self-made man worthy of admiration; hailing from Mexico and having to struggle with building his life as a dog handler in the United States, he has certainly displayed diligence and the doggedness (a word aptly used in this context) needed to build an ocean-like following. His efforts certainly manifested themselves in the seminar; no seat in the Grand Theater was left empty.
Cesar redefines the meaning of “energy”; he showed his knack for reading energy levels when he got the audience to stand up and dance to the Black Eyed Peas Pump It! to get it going. He gave a new twist to the meaning of energy when he showed what it is to be calm and assertive with the dogs on stage.
The Dog Whisperer certainly has an indisputable connection with canines. In the two hours at the Grand Theater, he showed a pomeranian how to ask for breakfast in the right manner, a feat that left its owner in tongue-tied awe. Rambunctious and jumpy when it saw food at first, Millan showed it that food did not only represent excitement; it also had a link to calmness and submission. The little dog, in a matter of minutes, kept a respectful distance from the food.
And there was the lovely Golden Retriever whose eyes lit up whenever it saw a tennis ball.Millanites in the audience were wowed by the Millan magic when he convinced the dog that the ball was not associated with excitement but a calm and submissive state; rewarding it when it managed to achieve a sense of balance. Again, the grateful owner left the stage with a happy, balanced canine.
The National Geographic’s star showed that being in the business of “rehabilitating dogs” and “training people” also meant a great sense of social awareness; dogs can have a therapeutic effect and Cesar certainly made no bones (again, an aptly used phrase) of announcing it.In a segment on inspirational dogs, volunteers from Therapy Dogs Singapore explained how our canine companions can bring the missing joy and happiness to those in need; Therapy Dogs brings joy to those in homes for the elderly and the intellectually disabled on a regular basis, leaving the residents with an immeasurable sense of peace.
Lessons learnt from the Dog Whisperer
Lesson 1: Be a pack leader!
In the too-short two hours with Millan, the audience discovered the importance of discipline before affection; a dog needs to be taught to be in a balanced state and owners need to drive home the importance of respecting boundaries. This is so with feeding; the little pomeranian showed that keeping a distance from food shows trust and respect for owners. Even walking a dog without it pulling requires techniques that make it necessary for owners to be “leaders of the pack.”
Lesson 2: Animals do not have prior knowledge
Cesar revealed that dogs do not have prior knowledge of an owner’s position; their reaction to people is not dependent on status or credibility and will not respect an owner for his position alone. That requires that owners show the calmness and assertiveness needed to bring their animals to a state of balance.
Lesson 3: Animal, Species, Breed
Millan then revealed that a dog’s breed is not an all-encompassing factor that determines behavior. He got the audience to consider the “animal-species-breed” hierarchy; the dog as a species will exhibit certain behaviors regardless of breed. They all react positively to calmness and assertiveness be it a Rottweiler or Chihuahua and do not behave in specific ways because of inherent traits.
Lesson 4: How odd couples can work together
The dominance effect was well-illustrated during the seminar; with a hilarious revelation of “odd-couple” pairs, the Dog Whisperer showed how a cat can actually make a Rottweiler feel that it is the most important in his world. A turtle can lead a hippopotamus; a monkey can have an uncanny influence on a cat. The message was clear; animals look to someone as a leader and humans have to show them the way.
Lesson 5: Calmness and Assertiveness should take root in our own relationships
One can apply Cesar’s “Calm and Assertive” technique to our own lives and relationships; calmness and assertiveness applies to the discipline of children and in working relationships. When we project the appropriate aura and energy, the people around us feel it and tend to behave in ways we expect. Indeed, calmness and assertiveness can be applied to almost any situation!
Lesson 6: The human makes the dog!
Finally, it is people who make dogs. A dog does not behave in a certain way because it is disposed to; it reacts in a certain way because our own temperament, hence the importance of being calm and assertive.
A big thanks to Cesar for coming all the way to Singapore-from him, Millanites gained insights into canine behavior and useful skills that can be applied to our own lives. All of us should stay calm and assertive!
By Michelle Liew
Categories: Useful Articles on Pets

This site uses Akismet to reduce spam. Learn how your comment data is processed.