Professor K9 on the gravity of animal abuse

On why and how animals are abused. 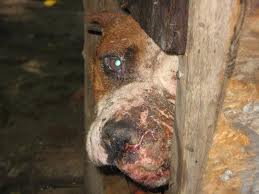 I, Professor K9, am rather stoical today; seeing so many of the animal kind being abused or mistreated puts me in a rather sombre mood and well, I am not really in the mind to joke as much (not to worry, I cannot resist a bout of humor or two.) Unfortunately, those of the human kind tend to treat animals with unparalleled condescension; hence, my discourse today is in the interests of raising the awareness of animal abuse. I have always been rather curious as to why the human kind has the propensity for dishing out unwarranted punishment on a harmless dog or cat (alright, being of the canine kind, I really do not like cats very much, but that does not mean that we have to mistreat them, you know.) Of course, we want to eradicate such errant behavior by finding out the reason why these substandard human beings love hurling abuse and how best to stop their ridiculous and less than charming behavior.
Why do humans take frustrations out on a poor animal?
Those of the human kind have this insatiable desire for power.
Those of the human kind have this great need for securing one upmanship. Their desire for control has no bounds; perhaps not finding the outlet for control elsewhere, they seek to channel the need onto the animal. It is a displacement of need; finding no outlet for exercising control (perhaps they lose control of their marriages when their better halves have affairs) they take things out on a poor, innocent fellow canine or feline being. The lengths they go to to propagate such abuse is too frightening to behold. The human becomes rather animalistic himself. 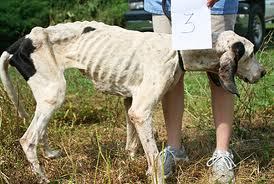 I once came across a terrier friend at a pet shop who was taken in by its kind owner. The terrier had been so badly abused that it did not want to communicate with anybody, growling with pent up frustration when anyone came near it. It cowered in the corner of the shop, largely hoping that those who came in would leave him well enough alone. The owner had lost control of it and pummeled it in frustration; the dog, of course, imbibed frustration of its own.
Some prejudiced humans love taking things out on a specific breed.
There are those of the human kind who have preconceived notions of a specific breed or kind; they have had that dubious benefit of education from their parents or anyone else with a preference for the perverse. They have been taught that a particular species or being is of inferior calibre.
There was an old lady in my neighborhood who believed that canines were, and still are, inferior beings; she planted the seed of dislike in her grandson, who abhors dogs to this day. Her grandson now really dislikes our kind – he recently got fined for kicking one of our doggy own when he came across it in the street. The poor dog, of course, whimpered in pain and hobbled off elsewhere.
These abusive members of the human kind have sadistic tendencies. 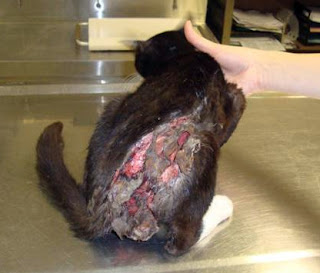 Some of the Human kind have a propensity for cruelty. It simply pleases them no end to hear someone, or in this case something else scream in uncontrollable pain. Hence, they use animals as an outlet to fulfill these sadistic desires. They derive enjoyment from heaping abuse on a defenseless animal.
A newsflash in Singapore involved the discovery of some kittens that were left in a dumpster. As if that alone was not enough, these humans actually used knives to gouge the eyes out of the kittens sockets; the pitiful meowing was heard, thankfully, by a nearby resident who alerted authorities to the problem. The man responsible was hastily arrested and slapped with a heavy fine – unfortunately, the sorry felines could not be saved.
Some humans have experienced violence themselves.
Some of the human kind have undergone brutal and humiliating abuse themselves; they see this as the appropriate way to behave or express themselves. The abuse they have suffered is deemed a fitting form of behavior which, performed on anyone or anything, is absolutely correct. A perverse form of thinking is condoned and considered, and wrongly so, perfectly acceptable.
Unsurprisingly, the un-gentleman who cruelly left mutilated kittens in the dumpster had been unceremoniously abused in his childhood; he viewed this as perfectly allowable because it was the norm in his household. Picking on a couple of cats, of course, was of no consequence to him.
These humans can be extremely vindictive.
I know not why, but these humans can have extremely vengeful tendencies. They react with wild abandon because they have been bitten by a dog or scratched by a cat previously; they see the animal’s behavior as hatred that they need an explanation for. The animal, though, could have acted in self defense or reacted to some other form of provocative behavior. 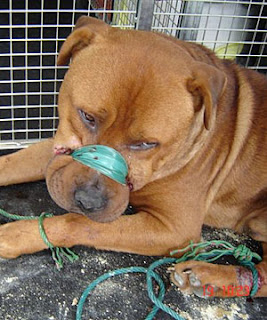 There are some curious Human kind around my neighborhood who simply go ballistic when they see a dog pee outside their houses. Out they come with a barrage of words, sticks, and a flurry of kicks. The sight of animals irks them because they see their territory being encroached upon. The animal, of course, has to answer for the unfortunate misappropriation of urine.
This need for revenge may not come about because they have been bitten by any animal as such; humans may also exact revenge on another human by displacing his anger and hostility on another animal. This is a perverse form of revenge and the poor animal is, of course, an innocent party.
Some humans want to reap the benefits animals can bring.
Poaching is an excellent example of this. The tiger trade, unfortunately, is still rampant; Tigers are shot and killed for the various body parts that can bring untold benefits for the selfish human being. There is of course, the tiger’s penis and the bear’s gall bladder, both of which are used as aphrodisiacs; the existing demand for the products makes in difficult to stem the trade any time soon.
How do these silly humans abuse those in the animal world?
Humans are extremely creative when it comes to dishing out abuse on the animal kind. If only they could bring forth their creativity in other forms.
An obvious answer, of course, is constant hitting and beating.
Remember the poor terrier who was hit with abandon by its owner? It, of course, is not the only animal to have fallen victim to such physical abuse; there are many others who have fallen prey to the human hand. Many handle their dogs and cats with a rod and a staff – the danger is that it becomes more than just a need for discipline and instead a pure venting of frustration.
Some humans think that animals like us are just simply too prolific.
Some human beings think that animals are a one-stop breeding station of sorts. They breed their dogs or cats as soon as they are available to, or when they have already propagated a litter. 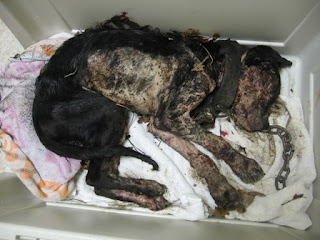 My human owner once went on a date with such a rascal. He told her that he was into dog breeding – that one can make money from breeding animals and selling them at higher prices. Unsurprisingly, the temerity of the un-gentleman in saying such things made my Human do an about turn while on that date.
These abusive humans keep their animals in very cramped conditions.
The human being loves keeping animals in cramped conditions because they are afraid of the dirt that will be brought into the homes. They hold the poor animal hostage in cages or on very tight leashes for the entire day.
A Human neighbor kept her miniature schnauzer in a cage; the dog had no place to stand, much less walk about. The pitiful creature remained this way for a total of the 12 years of its short life. Attracting the attention of the SPCA, the human owners were thankfully fined for keeping the poor dog in these conditions.
Puppy mills, too, are fodder for such abuse; puppies are kept in cramped conditions; so cramped that the puppies arrive in new owners homes with multiple injuries and defects.
Some human owners love utilizing animals for their own benefits.
Apart from poaching, there is an less direct form of animal abuse; utilizing the animal for the monetary benefits it brings. Such humans only keep the animal for monetary reasons; they neglect the animal once it is of no use to them.
A West Highland Terrier I once knew was a perfect poster dog for ads along walkways and under passes. For its cuteness, it was extremely popular; he posed for ad after ad, bringing in lots of money for his human owner. The owner cruelly left him abandoned on the roadside once he was deemed too old and unfit for further use.
Some humans abuse through sheer neglect. 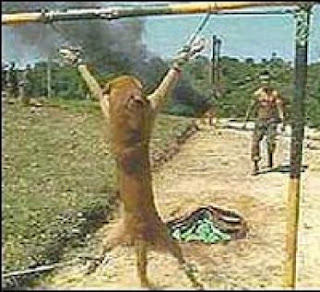 To borrow a Singaporean term, these human owners are known as being very “bo chap” or not willing to care for their animals. They go beyond forgetting their pets’ dental care or bringing them to the vet; they simply regard even the little things like feeding their pets as unimportant.
Rosco, a dog once taken in by my human owner, was one such dog. He was left abandoned at the animal shelter and was obviously very hungry; he wolfed an entire can of dog food after he arrived in his new home. His teeth, too, were in poor condition and he had bad breath; his human owner had to clear his mouth of plaque and all gum infections.
How animal abuse can be stopped
Alert the Royal Society of Prevention of Cruelty to Animals
or any animal society in your area if you spot animals being abused. Awareness is a sure way of curbing the problem.
Be Proactive.
Humans, it is really good to obtain some karma by feeding the occasional stray dog or cat;the animal will be eternally grateful to you. It lessons the effect of abuse to at least a certain degree.
One can also blog and bring up the matter of abused animals; this raises the awareness in the community. I was extremely hearted on my walk with my human owner to see some youth promoting awareness of animal abuse with brochures.
New pet owners can also be taught on blogs how to care for animals in a proper manner; added knowledge helps lessen abuse.
All in all, the abuse of animals by human kind is highly unsatisfactory and must be stopped. On an ending note, the photos in this article may be slightly graphic for some; the intention is just to bring about the awareness of animal abuse to all. Do look forward to Professor K9’s next discourse on dog discipline.
Categories: Stories about pets, Useful Articles on Pets

One Reply to “Professor K9 on the gravity of animal abuse”

This site uses Akismet to reduce spam. Learn how your comment data is processed.